Being a Montreal-based blogger, I thought I’d write about Montreal in general this time. A city world renowned for its lifestyle, nightlife and multiculturalism, Montreal is definitely a place to visit, or a place to be proud of if you’re already living here.

Montreal is a city of many languages due to its high multi cultural population , something that makes the city so much more interesting. Walk around downtown Montreal and you can hear several different languages being spoken. The city’s official languages though, are English and French (which can be up for debate, but lets not get into that). When visiting, be aware that most signs will be in French only, and although you can guess and try to get around on your own, you’re probably better off asking people if you need help. Montreal is a friendly city and most would be glad to help you out. 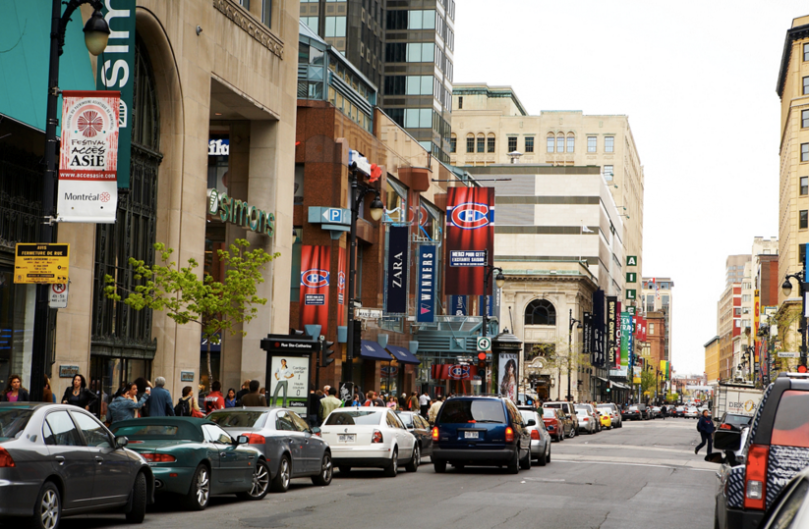 The city has really great history, something you can easily learn about by visiting one of its many museums. Seeing as Montreal was first explored by the French, the city has a very European feel to it. From French architecture to language and religion (which is shown through the great amount of beautiful churches and cathedrals scattered around). To be honest with you, when seeing the downtown areas of some big European cities, I can absolutely see the resemblance to my city. I can also see the European feel through the love for fashion and design of the city. Don’t get me wrong through, Montreal isn’t a small historic-looking city. It’s quite large and very modern. Visit Old Montreal, where you’ll see the perfect example of old-fashion architecture with modern buildings just next door.

Events are just as important for this city as the fashion is. We’re all about culture and community. Apart from the bigger and globally-known events such as Osheaga or the Jazz Festival, the city has many other ones to offer. We have comedy festivals such as Just for Laughs, food festivals like Oyster Fest, winter festivals like Igloofest and film festivals like Fantasia. Some of the events are way more niche-oriented, but lots of them are well known and not so niche-like. Regardless, lots of them are worth a shot.

Lastly, the city is very well-known for being a city for foodies. You can find great restaurants literally all over the island of Montreal. From east to west, small and big restaurants, fancy and expensive or equally delicious hole-in-the-wall joints. I’d definitely recommend restaurants in downtown Montreal for a tourist though. The downtown has everything you need from entertainment and shopping to food, the most important part. If you’re looking for a nicer sit down meal, you can find that. And if what you’re craving is a greasy meal, let me tell you that you can definitely find that as well. The best part about it is that you can find one type of restaurant and have a completely different kind of restaurants just around the corner. You can also try using our Metro system, a great and easy way to get around like a true Montrealer. And if you want to be even more of a Montrealer… try a poutine or a smoked meat sandwich! Both of which are very well known for being delicious, fatty and Montrealer.